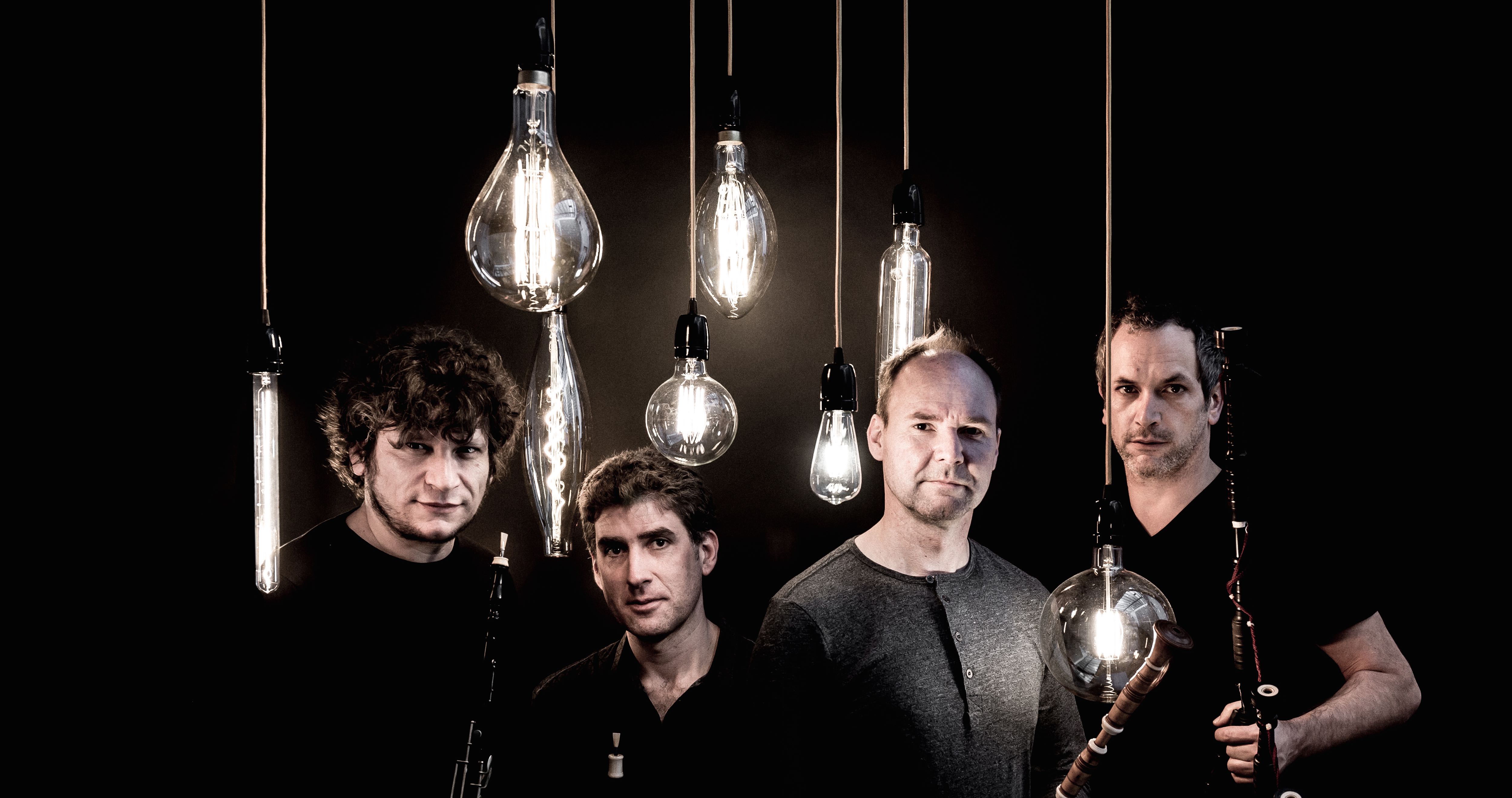 After the first thirteen contemporary music pieces  –nine for solo piping (Nu Piping #1) and four more for a voice and bagpipe trio (VOX, Nu Piping#2)– Erwan wished to explore the possibility of extending his ambition further than his own instrument, i.e. of modifying a strong cultural origin. To achieve this, he has set up a piping quartet that brings together the four instruments of the Breton piping tradition, starting with the historic bombard and biniou koz and including the Scottish bagpipe, which has become Breton over the last century, and the trelombard, invented to act as a counterpoint to the bombard and bagpipe in bagadou (plural of bagad: Breton piper bands). With its culturally-marked instruments, this quartet is characterised by its raw sound, rich tone colour, continuous biniou and bagpipe resonance, condensed spectrum and, obviously, powerful sound.

At present, the only existing contemporary repertoire concerns the Scottish bagpipe (mainly thanks to Nu Piping). As for the other three instruments, SONNEURS will be their first journey into the world of contemporary music writing. Whoever is familiar with the biniou koz has no doubt about its aesthetics and originality, yet the bombard and trelombard are not to be outdone. The bombard is said to be the ancestor of the oboe, but this filiation can be misleading since their tone colour and impact are quite different.

Although it does not exist in the Breton piping tradition, to Erwan this quartet is the symbol of the traditional material that he has suggested to Wolfgang Mitterer. The choice of the Austrian organist and composer is highly significant: indeed, he is experienced in both instrumental practice and music writing, which enables him to write music linked with practice and fingering, as well as to compose while playing, with remarkable experience in both fields. His culture of organ playing has also made him a brilliant improviser. He thus invests the three fields closer to his heart: instrumental playing, improvisation and music writing. With its rich energy and great finesse in friction and dissonance, Wolfgang’s writing will find a great playing field in this new environment.

Susumu Yoshida already wrote a piece for the bagpipe, which is featured in the solo programme Nu Piping≠1. Inspired by the musical form of prayers at the Japanese Imperial Court, it is a major piece in this solo programme. Working with Susumu has been a rare experience in both his own dedication and the commitment he expects from others. He sets himself very close to the players in order to find how his own thought can find its place.

As a composer and instrumentalist sailing through various aesthetic styles, Samuel Sighicelli can be likened to Wolfgang Mitterer. Yet the resemblance goes no further, since besides contemporary music, it is progressive rock that Samuel Sighicelli has chosen to devote himself to, in Caravaggio.

Lastly, for the fun of it… String and wind quartets are two key ensembles in erudite music. Henceforth, thanks to this third Nu Piping undertaking, a new one is to be added: a piper quartet. Perhaps, one day, this ensemble will become part of the Western erudite music tradition – who knows?