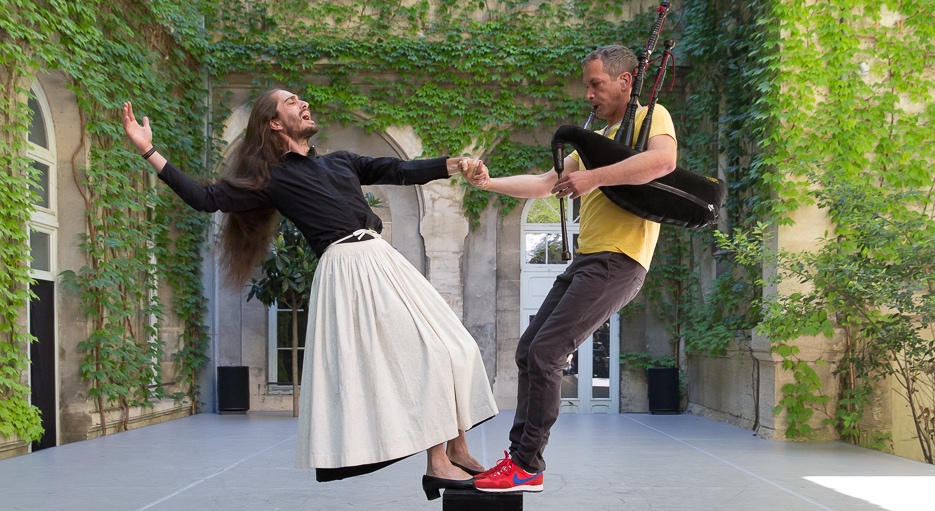 In April 2016, the SACD (the “Society for Dramatic Artists and Composers”) and the Festival d’Avignon put forward a proposal for Erwan Keravec and Mickaël Phelippeau to work on a duo performance as part the Sujets à Vif programme. Both artists – a bagpipe player and a choreographer – share the common trait of working/interacting with their own identities in order to transform them.
With this project, they explore the notion of heritage. Erwan Keravec grew up and learned to play music in bagads, ensembles performing traditional Breton music. As for Mickaël Phelippeau, he discovered traditional Breton dancing over 30 years ago. This was their point of departure.
This project takes us through the broader tendencies underlying their identities, then pulling away to find a deeper meaning.

Erwan Keravec and Mickaël Phelippeau, over a Breizh Cola and a Coke Zero. Avignon – July 2016.

Mickaël            Initially, we wanted to create a portrait of you – at least, that was my intention… and then we leaned more towards sharing the stage together.

Mickaël            Yes, that’s true. I remember the first day we worked together. I thought we’d go directly to the studio, and you said, “We’re going to have coffee and smoke cigarettes. We need time to chat, and to truly meet one another. Isn’t that the main idea behind your work?” After that, we had many, many coffees.

Erwan               We started with this idea of a phantom limb. You had me read Peter Szendy’s book, which talks about learning to play an instrument, and it made a lot of sense. I often wonder what remains of traditional Breton music in me.

Mickaël            Generally speaking, our focus was on the question of heritage. Moreover, we quoted a lot of people during our 30-minutes performance. There were the usual grand references – but also our own, more personal ones. We really asked each other what we’d been raised on: the stuff we’re made of, and the stuff we have made, but also the things we both share in terms of heritage.

Erwan              Curiously enough, there was a common interest in my traditional Breton culture.

Mickaël            In my case, I got interested in traditional Breton dancing 8 years ago.

Mickaël            Yes, but my encounter with a choreographer of traditional Breton dancing brought me to it. That was my starting point, and not a desire to go towards this type of repertoire. You did the exact opposite: you were educated and built yourself up from this culture, ultimately leaving it to move towards a more contemporary repertoire.

Mickaël            You had the bagpipes. We thought I should take on an element linked to tradition.

“...their remarkable, mutual commitment never fails. Whether it is the crazy, free sounds performed by the bagpipe player, or the bouncing, hybrid, genre-defying and extraordinary gestures of the dancer, much of which he develops in a large round dance. One will also see the very complex and graceful accents of Breton dances, which this fellow masters perfectly....”